Home
Sport and Fitness
Work out like a woman: why men are swapping weights for yoga classes in pursuit of optimal fitness 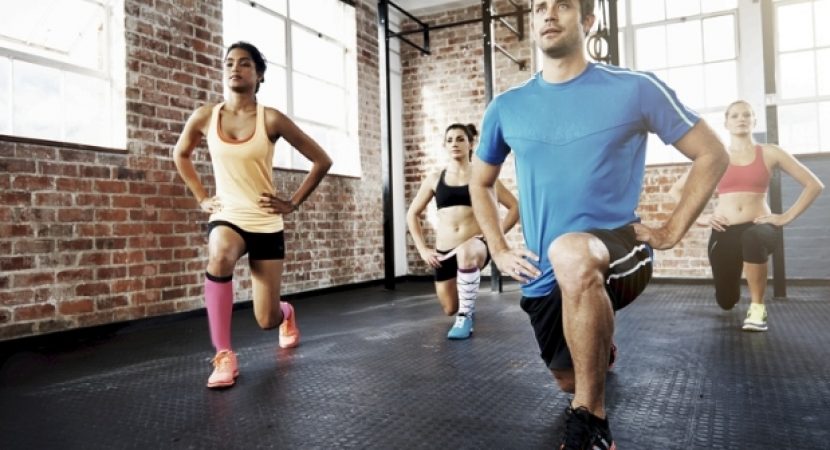 Men are realising what women have always known: fitness isn’t all about weights and sweat. They now do ballet and yoga

This summer a three-minute video entitled Like A Girl went viral, attracting more than 25 million hits. It featured a group of children and adults who were asked to demonstrate how they would “run and throw like a girl”. Whereas the pre-pubescent participants aped the actions of top sports stars, the older volunteers, regardless of gender, interpreted the instruction as an insult and pranced with flailing arms or threw with a feeble motion.

So evident was the negative gender stereotyping of women’s sport and fitness among all but the children that the video caused widespread consternation. Yet ironically a growing number of men are quietly emulating women’s approach to exercise, which they have discovered have strengths that were previously kept well hidden from them.

A decade ago you would have been hard pushed to persuade a middle-aged man to try yoga or Pilates for the good of his health. Most would have balked at the idea of limb-lengthening and core-tightening as a route to a better body; weights, running and sweaty effort were considered the order of the day for getting into shape. Yet the most unlikely fitness revolution is seeing a growing number of men ditch the hardcore approach to exercise previously perceived to be somewhat girlie. Ballet fitness, mini-trampoline classes and spinning are among the workouts of traditionally more feminine appeal that are attracting a bigger male clientele, many of whom are in their forties or older. It seems they have discovered what women have known for years: fitness needn’t always come down to busting a gut.

What has undoubtedly helped to fuel the emergence of what is being dubbed the “crossover fitness” movement is the number of male celebrities and athletes who buy into it. The list is endless. Rory McIlroy says that yoga and breathing techniques have improved his golf, Andy Murray that Pilates and “hot yoga” have boosted his fitness. Footballers David Silva, Rio Ferdinand and Joe Hart have all enthused about how regular yoga keeps them on top of their game while David Beckham and Ryan Bertrand bounce their way back from injuries on the housewife’s favourite home-gym equipment, a mini-trampoline. Mick Jagger has revealed that his physique is down to ballet. Bradley Cooper, Tom Cruise and Jake Gyllenhaal are regulars at SoulCycle Spinning classes in New York. As Sarah Ramsden, a Chester-based yoga teacher who works with numerous top football clubs including Manchester City and Manchester United on a weekly basis, says: “If it’s good enough for a footballer or a celebrity, then an activity becomes instantly acceptable, no matter how it was viewed before.”

Those who have observed men switch in droves from CrossFit and military circuits to the gentler end of the workout spectrum say that the reasons for eventually taking the plunge usually come down to two things: a body increasingly prone to injury or excess flab and a healthy shove to get it sorted by their other half. Niki Rein, the founder of Barrecore, a ballet and resistance programme with studios in Chelsea and Mayfair, has seen a sharp increase in male members this year and says there’s a big female influence.

Men see women not only getting leaner and stronger, but getting less of the troublesome niggles that strike in the middle years: back pain, joint problems and stress. It’s part envy, part curiosity that sees them cross the studio threshold, Rein says. And Tracy Anderson, a celebrity trainer known for honing the bodies of glamorous females such as Gwyneth Paltrow, Cameron Diaz and Molly Sims, has recently added a men’s programme to her portfolio. “My clients’ husbands have seen their wives transformed,” Anderson says. “They want to try the workouts too.”

Group indoor cycle classes, a workout genre that was previously dominated by women, is also attracting men in their droves. New takes on classic Spinning, such as the Psycle London studio overseen by Tim Weeks, an Olympic triathlon coach, are luring men along with the promise that it entails truckloads of effort and will produce a cyclist’s physique. “Men like exercise to involve maximal effort and some competition,” says Weeks. “And once they’ve tried a class they realise they can push themselves on an indoor bike.”

Ramsden, who helped Ryan Giggs produce his yoga fitness DVD a few years ago, says it’s all part of a massive shift in the idea of what fitness means to men. “It used to be all about getting cardio-fit and strong, but now that elite sports people have added flexibility, balance and postural awareness to the mix, it’s opened doors for a lot of different techniques to be added to their training,” she says. “The good thing is that the message is filtering down to the average gym-goer and recreational athletes.”

There’s a tendency for all of us to shirk the kind of exercise we find tough. With women, with their naturally lower muscle mass, it is more often weights and resistance that gets the cold shoulder. Anderson says: “Men are built very differently and generally have less flexibility and range of motion.” Stretching is often off the agenda and Rein says they also “tend to work only the body parts that they can see in the mirror” — the pecs, the abs — potentially leading to muscle imbalance and poor posture over time.

The crossover workout can initially come as a shock. “I’ve seen fit men dissolve in a pool of sweat without actually getting off their yoga mat because they’ve never worked on the kind of muscular resistance that is a focus in yoga,” Ramsden says. “At the start they are basically using a lot of oxygen to move very little as their bodies are so inefficient. That really brings it home.”

Anderson’s existing fitness empire, with gyms in New York and Los Angeles, was founded on her trademark dance-based workout regimen, which includes endless repetitions of exercises using very light weights. And the male version of her “method”, tested by Matthew McConaughey and Robert Downey Jr no less, is based on a similar premise. It’s the antithesis of the male gym-junkie ideal. Men don’t lift a free weight over a paltry 10lb and a lot of the movements are so small they appear negligible. Participants might be sniffy about it if they have spent the past decade pumping heavy iron, but they invariably finish exhausted: each move uses a multitude of muscles instead of bulking up. “It’s absolutely no joke for men,” she says. “I ask them to access and activate muscles they didn’t even know they had.”

Similarly, Rein has found that men doing ballet workouts “really struggle at the barre when they start because their lower-body conditioning is nowhere near as good as their upper-body strength. The small isometric movements and stretching of ballet are very challenging for men used to doing power workouts and weights.” After a few weeks, things click: they feel less stressed and tense, but fitter.

Even the mindfulness of something like yoga, traditionally derided as flaky by gung-ho gym goers, doesn’t put them off. “It’s impossible to create flexibility without calming your mind,” Ramsden says. “So it’s about selling it to them in a language they understand, relating it to sport, strength and speed rather than going all-out Sanskrit.” Ramsden says her yoga classes for the general public are “now almost entirely full of men”. It was once a rarity to spot a man in a sea of LuluLemon leggings and Sweaty Betty tanks. Not any more. They’ll have whatever workout she’s having.

What works for her

Barre work
(www.barrecore.co.uk; everybodyballet.com; barretoned.com)
Niki Rein of Barrecore says ballet exercises at the barre are exceptionally good for building the core and lower-body strength that men lack. There are also lots of repetitions of tiny movements that build muscle endurance. It all serves them well in other sports, leaving them less prone to fatigue and injury.

Psycle
(psyclelondon.com)
A serious take on Spinning underpinned by science and for which you wear clip-in cycle shoes. It’s set to music selected to ensure it provides the precise beats per minute to maximise performance, as set out in studies by sports scientists at Brunel University London. There are plans to collaborate with Team Sky, using the professional cycling team’s laboratories to test how well the psycle workouts really do improve fitness. SoulCycle, a US chain with similar principles, is rumoured to be launching here in 2015.

Mini-trampolining
(boogiebounce.co.uk; rebound-uk.com)
Much easier on the joints than pavement pounding, a workout on a mini trampoline reduces impact by up to 40 per cent. It offers a low-impact workout that can help to tone the core muscles used for stabilising the body while jumping. Group classes such as JumpLife are huge in New York. Here physios recommend it for injuries and boosting fitness.

Kegel moves
Pelvic floor exercises are not just for women any more. A new paper in the Journal of Urology says that the pelvic floor muscles “are the backboard of sexual and urinary health” for men. Dr Andrew Siegel, a urologist who wrote the report, sells a pelvic floor programme (privategym.com) for men that includes a workout DVD and an ultralight weights system that fits around the penis for added resistance. Ouch.