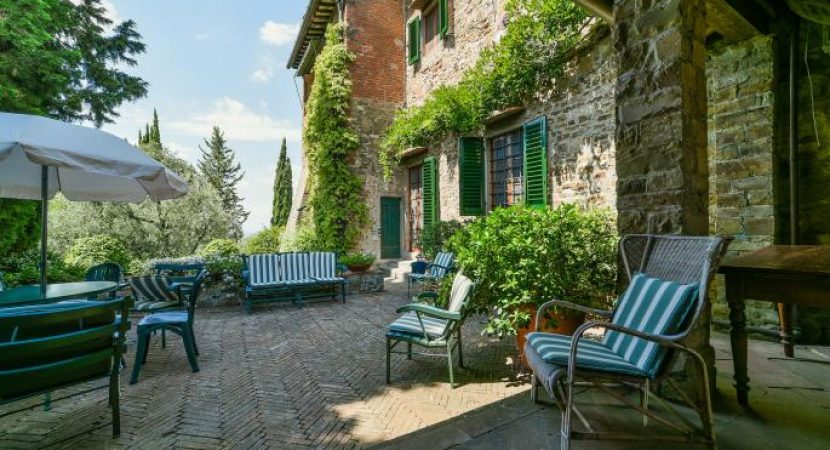 This villa near Florence has been in the Room with a View star’s family for almost 70 years. As it goes on sale for €4m, Home gets a grand tour

In the 1985 film A Room with a View, Helena Bonham Carter threw open a window in Florence and became an instant A-list movie star. Away from the cameras, the Oscar-nominated actress has nurtured a lifelong love affair with Tuscany: her family own a home on a hillside above the city.

San Martino, a converted medieval watchtower, is surrounded by olive groves and cypress trees, giving visitors a sense of being in the heart of the Tuscan countryside. Yet the house, which is now on the market for €4.07m (£3.4m), is just five minutes’ drive from central Florence.

It has been in the family for decades — Bonham Carter, 50, stayed there as a teenager while filming the Merchant Ivory adaptation of EM Forster’s classic novel. She played Lucy Honeychurch, an innocent abroad who falls madly in love with George Emerson (Julian Sands) after he kisses her dramatically in a poppy field on the outskirts of Florence. In fact, A Room with a View was something of a family affair: her mother, Elena, and her grandmother Hélène Propper de Callejon both appeared as extras in the movie.

The property, which sprawls over 5,000 sq ft, with eight bedrooms and an outdoor pool, has been in the family since 1947 and is currently owned by Elena, her brother Felipe Propper de Callejon and their cousin David Pryce-Jones; Helena has been a regular visitor all her life, often coming on holiday with her children. The family joke is to put a sign saying “A Room with a View” outside her bedroom door whenever she visits.

Recently, however, they have decided to sell the Italian pile, which offers vistas of the rooftops of Florence everywhere you go — even in the downstairs loo. “We see it as a sanctuary where you feel safe,” Elena says, “and it is just so incredibly beautiful. You look out and there is this extraordinary scene of different greens thanks to the sea of olive groves below.”

The decision to sell has been painful, but is being forced on the family both by the ages of its owners and by the inheritance laws of Italy, under which all children must inherit an equal share of any property their parents hand on to them. “All three of us have passed the 80-year departure point,” explains Pryce-Jones, a writer and historian. “If our children inherit, there will be eight owners, while in the following generation there are 23 grandchildren. We thought it was unfair to leave it like that.

“We’ve put it off as much as we can, but it would be risky to put it off a bit more. Of course it’s sad, and I hate change, but life is like that.”

Anyone giving up San Martino, in the prestigious suburb of Arcetri, south of the city centre, would feel sad. As Elena puts it: “How does one let go of a bit of paradise?” From Florence’s railway station, your journey to the house takes you past Piazzale Michelangelo, a tourist honeypot with panoramic views over the city, then beneath the striking Romanesque basilica of San Miniato al Monte, one of the most scenic points in the whole of Italy.

The route takes you near Villa Il Gioiello, once home to Galileo, and the nearby astronomical observatory before you reach San Martino along a quiet country lane. On foot, it takes half an hour from the house to reach the Ponte Vecchio, the famous 16th-century bridge over the River Arno lined with jewellers and art dealers.

At first sight, the property appears modest, even nondescript, but step inside its shaded medieval courtyard, surrounded by lemon trees, and you’ve arrived in a secret oasis. It is here that the family have given birthday parties and wedding receptions, and whiled away many summer evenings.

Although the structure is 14th-century, the house has ancient origins, as demonstrated by the Roman pillar in the courtyard. Over the years, it existed in many guises, including a spell as a convent, before being turned into a villa in the 1920s. There’s a terrace that leads into a landscaped garden, with roses and a walkway that takes you past manicured hedges, behind which you’ll find the large swimming pool.

Inside, San Martino is full of rustic charm. Slightly worn carpets, a fireplace and red sofas sit beneath vaulted ceilings. The atmosphere is, naturally, bohemian: English country home meets Tuscan farmhouse. Indeed, part of the property was once used as a cowshed, in the days when this was a farm. Pryce-Jones remembers old farmers telling him how they used to walk their cattle from San Martino to drink from the river.

Above all, it feels like somewhere that has been loved over the generations. There is a lived-in charm to the place, no doubt thanks to the many family holidays when big groups descended and lived cheek by jowl, bedding down on inflatable mattresses.

Much of this is documented in the visitors’ book, which, suitably, sits next to a copy of Vogue with Helena on the glossy cover. One entry, from August 1984, is signed “Helena Bonham Carter and friends”. There are pictures of the actress, including one of her sitting on the steps beneath Florence’s Duomo, and of the director Tim Burton, her former partner, who was also fond of San Martino.

As well as a holiday retreat, the house has been an inspiration — little wonder, given that the region produced founding fathers of the Renaissance such as Leonardo da Vinci, Michelangelo and Brunelleschi.

Pryce-Jones, who is an expert on the Arab world and a former literary editor of The Spectator and the Financial Times, penned a number of his books in the peaceful study, including his recent memoir, Fault Lines (published by Criterion). It includes stories about San Martino and the woman who bought it, Mary Wooster — his grandmother and Helena’s great-grandmother.

Also known as Mitzi or Marie-Cécile, Mary was the extremely wealthy only daughter of the Austro-Hungarian industrial magnate Baron Gustav Springer. She was also a powerful, dynamic character who spoke many languages, and lived in the house until her death in 1978.

She purchased San Martino to help her second husband, Frank Wooster, who had been a prisoner of war in the First World War and suffered from bad health — the air around Florence was supposed to be beneficial. He married Mary after the death of her first husband, Eugène Fould-Springer. Frank knew PG Wodehouse, and apparently inspired the surname of the novelist’s most feckless character, Bertie.

Given the political instability in Italy just after the Second World War, it wasn’t straightforward for outsiders to buy property there. “When she bought San Martino, communism was on the rise and someone had painted a hammer and sickle on the front door,” Pryce-Jones says. “Granny was warned that the communists might attempt to seize the house, but she replied, ‘I’d like to see them try.’”

Despite this, Frank and Mary managed to create an eclectic, cosmopolitan world in Florence, thanks mainly to her wide circle of friends. They included Bernard Berenson, one of the world’s leading art critics, and Sir Harold Acton, the Italophile scholar, poet and connoisseur who was the consummate aesthete of his generation.

“Granny knew everyone there was to know,” Pryce-Jones says. “Harold was a big family friend — I remember him coming over and singing Chinese songs, as he had spent some time in Beijing before the war.”

In true Grand Tour-era style, the house is today looked after by full-time staff, one of whom lives in a cottage next to the main house, in order to care for the gardens and ensure that it is maintained properly.

While a refurbishment took place in the 1990s, there is scope for work to be done upstairs on the bedrooms and bathrooms, which look as though they have not been updated for many years. On the plus side, one of the main bedrooms has a private terrace that offers the best view in the entire house, where you can see for miles into the distance: a mixture of green and the rooftops of Florence.

Today, it is no longer the English gentry who are buying up desirable properties in Florence. Buyers come from all over the world, and are likely to be drawn to San Martino because it is in one of the most sought-after areas of Tuscany. A few years ago, a Russian oligarch brought a nearby castle for €18m — the crane helping to renovate the property can be seen on the horizon.

“Clients can be almost any nationality,” says Jeremy Onslow-Macaulay, managing director of Casa & Country, which is marketing San Martino. “In the past year, we have dealt with Middle Eastern, French, Lebanese, Brazilian and Indian buyers, as well as the British and Americans who have for so long loved this city.”

While the family have put the property on the open market, there is a hope that one of the members of their extended clan might make a bid. There’s even a chance that Helena may not feel ready to tear herself away from the area that made her name.